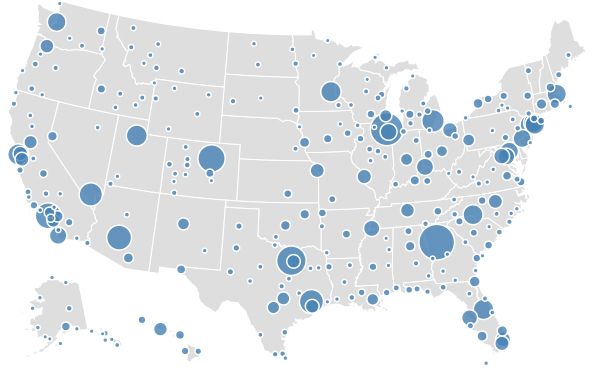 Large distances and diverse terrain relief make the aircraft a popular means of transportation within the United States. The country is also highly popular among tourists worldwide. Hence a large number of airports, fit for international and domestic travel. Many hubs are congested. The congestion is defined by its passenger traffic. The latter stands for the number of people who deplaned or enplaned at the air hub within a certain period. The FAA statistics are based on the period of 1 calendar year. Passenger traffic includes international (travelers coming from or leaving abroad) and domestic (fly within the country) passengers. Airports can be divided into two categories:

Busiest Airports in the U.S.

The USA-based hubs usually feature active passenger traffic. Ten of the 50 world’s busiest airports belong to the U.S. They aren’t always the top largest ones by area. The busiest airports in the US serve over 10 M air travelers annually and have international or regional status. They are called «Large hubs» and marked with the «L» letter in the FAA classification. Any hub that serves over 1% of all air passengers traveling to/from/within the U.S. annually belongs to «L» airports.

The ranking also has a subcategory of the busiest airports in the United States. The airports that handle from 0.25% to 1% of air travelers’ total flow are marked by the «M» letter. This stands for «Medium hub».

Biggest Airports in the US

When it comes to airports, the terms «biggest» and «busiest» are frequently used interchangeably. Anyway, the term «big» denotes that the airport has a large area for its runways and facilities. It would seem logical to assume that the busiest airports are also the busiest. But it’s really not.

The large-size airports in the U.S. do handle a lot of cargo and serve many passengers. Five of them are listed among the top 10 world’s biggest airports. At the same time, their passenger numbers may be lower than those of smaller airports. The reasons might be the location (the tourist attraction rating and connectivity with other cities), the level of infrastructure development, the cost of flights, and so on. Wonder what is the biggest airport in the US? Here are our top 5.