One of the largest airlines in the world, British Airways operates a fleet of Airbus A380s, which are among the world’s most technologically advanced aircraft. These British Airways A380 planes are highly efficient and friendly to the environment while offering passengers a luxurious and comfortable flight.

In a typical three-class configuration, the Airbus A380 is a double-decker, wide-body jet that can carry up to 853 passengers. It is one of the most impressive planes in the sky because it is the largest commercial plane in the world and has an 80-meter wingspan. It also has a unique lighting system that mimics the natural light cycle, which helps passengers fall asleep faster.

The BA A380 First cabin features 180-degree reclinable seats that can be made into a bed with a duvet and a comfy mattress. A personal entertainment system with a large screen, noise-canceling headphones, and a wide selection of music, movies, and TV shows are also available to passengers. This section offers passengers the highest level of luxury and comfort.

The Club World cabin, version of A380 British Airways Business Class cabins, provides a personal entertainment system and noise-canceling headphones. Passengers also get a self-service bar and a comprehensive menu, with seats with enough space for passengers to stretch. The World Traveller Plus cabin is Premium Economy Class, with a personal entertainment system and more comfortable seats than the World Traveller cabin. A self-service bar and a full menu are dining options for passengers.

All passengers on this plane enjoy many perks that make flying truly pleasurable, apart from its comfortable seating arrangement and entertainment options. These include a self-service bar open throughout the flight, various power outlets and USB ports, and a duty-free shopping service. 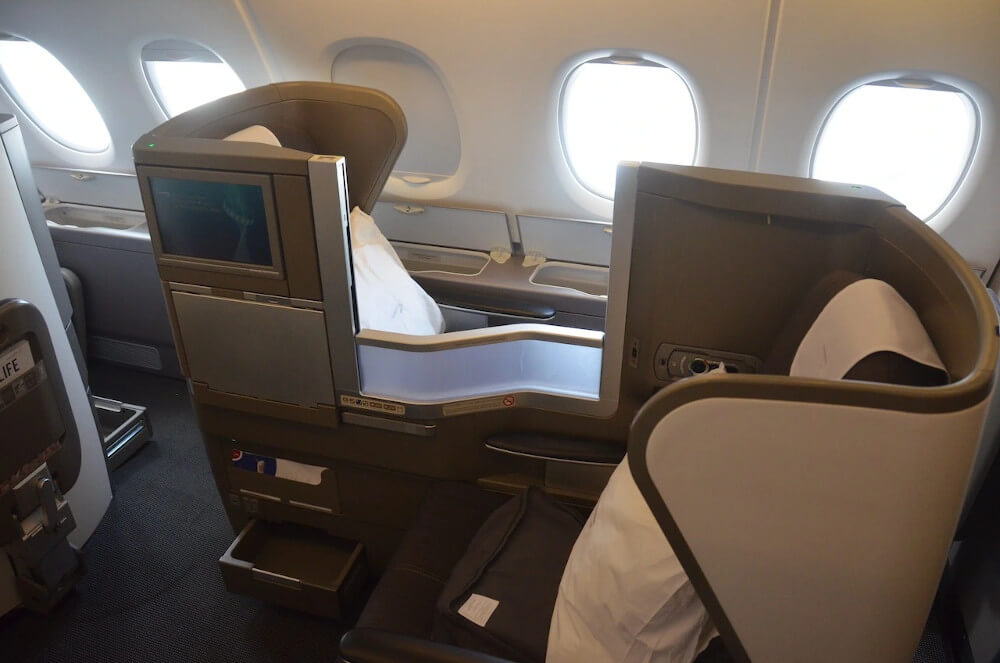 Columns 20, 35, 70, and 80 on the British Airways A380 seat map are the best seats as they have extra legroom. The fact that there is no seating in front of seat 25D makes it unusual and provides a lot of legroom.

Due to their increased legroom, seats 70B and 70J are regarded as excellent options. However, because these seats are narrower, other passengers frequently congregate here to use the restrooms.

The seats in the 78th row have two primary drawbacks: they are close to the restrooms and have limited recline due to a wall behind them. The proximity of the galleys, which may be bothersome, is the only drawback of the seats in the last 83rd row.

The British Airways Premium Economy A380 55 seats are in rows 60 to 68 on the upper deck behind Club World. A 2-3-2 layout has seven seats per row.

Each seat has an 8-inch recline and a 38-inch seat pitch. The window seats, where you can have two seats together, are likely popular with couples. Taking two seats in the middle block makes no sense.

The three seats in the 60th row, along with seats 61AB and 61JK, are the best ones in this section. The extra legroom in these seats will make them feel at ease here. The tray tables, however, make these seats a bit smaller since they are set in place in the armrests.

The proximity of the restrooms is the only drawback of seats 67AB and 67JK. Because they are close to the restrooms and may have limited recline, the seats in the 68th row are considered bad seats.

The British Airways First Class A380 cabin has 14 seats in a 1-2-1 layout in four rows, with 1-1 seats in the front. Rows 1 through 4 are where you’ll find the First Class cabin at the front of the central (lower) deck. Since each seat in the cabin is virtually identical, there are no «bad» seats.

Due to their slight distance from the forward toilets, seats 2A and 2K are excellent for solo travelers. They are very private because no one can look at the people sitting in them or see any other passengers. On the British Airways A380 First Class seat plan, row 1 usually only goes to people with the British Airways Executive Club Gold card, but if you can get a seat in either 1A or 1K, it is the best.

The map of seats on the Club World main deck of the British Airways A380 Business Class shows a 2-4-2 layout (two-three on the upper deck), at least for the time being. There are 97 business class seats on the main and upper decks of the plane interior. Then 44 are in a cabin behind BA A380 First Class in rows 10 through 15 on the lower deck.

The upper deck of the British Airways Airbus A380 features 53 Business Class seats. There are no windows in the seats 50A and 50K.

Rows A, E, F, and K require passengers to step over other passengers’ legs to exit, even though newer BA A380 Business Class seats, such as the Club Suite, frequently provide all-aisle access.

Passengers in seats 50B and 50J may find the proximity of the restrooms distracting because other travelers frequently pass by these seats. The proximity to the toilet is the only drawback of seats 56F, 56J, and 56K.