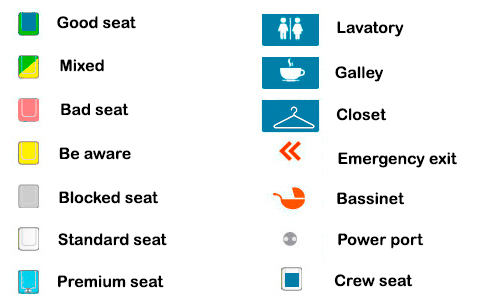 The United 757 300 seat map shows a fuselage with 24 First cabin, 156 Economy, and 54 Economy Plus seats. Passengers can use this seat map during bookings and boarding to select or change seats or cabins. But once on board the aircraft, the flight experience gets determined by the cabin and seats the passengers choose.

On board the United 757 300, all travelers receive free soft drinks. Liquor s are offered to travelers in the First cabin. All customers can purchase premium alcoholic beverages at extra cost. The United 757 300 seat map depicts the Economy cabin as one where customers may buy snacks, sandwiches, and other fresh food items.

All 757 300 United airplane cabins have internet access. As soon as the plane reaches 10,000 feet, you may use your laptop or smartphone to access the internet. This airplane delivers the service without the need for extra payment, in contrast to certain other airlines that charge for it.

While flying in the United Boeing 757-300, you can enjoy high-quality leisure. The portable devices allow you to watch choice videos.

The 24 United 757 300 First class reclining seats are arranged in six rows. The First seats 1A and 1B, are the most desirable due to their increased legroom. Considering their features, the lack of footrest should not be a concern. But it isn’t all rosy for First seats as there is less wiggle space for passengers in the 1E and 1F United 757-300 First Class seats. Its short distance from the galley is another drawback.

This section is behind the United 757-300 First Class cabin. The cabin can accommodate 39 to 57 persons based on the layout.

An exit row before the seventh row makes seats 7ABC and 8DEF more comfortable for passengers. However, these seats make passengers endure being around others who want to use the restroom. There are no storage compartments at the floor of the seats. They are also narrow since the tray tables connect to the armrests.

The Boeing 757-300 United Economy cabin takes up two sections in the plane. The seats 16A and 16F may be unsuitable since they lack windows. Meanwhile, 19C and 19D are preferable, thanks to their adjustable armrests.

The 20th-row is between two exit points; hence, it has more legroom. However, they do not recline as much as passengers may want. Additionally, the airflow from the aircraft’s exits may inconvenience the people sitting there.

The best seats in the United 757 300 Economy cabin are in the 21st row. These reclining seats are better and are near the departure door. But the area may sometimes experience chilly temperatures, which may cause discomfort.

A reservation for one of these and the 20th-row seats requires a charge 24 hours before departure. These 757-300 United seating positions are available for reservation to Platinum and Gold Elite members.

The seats 31ADC and 32DEF in the United 757-300 seat map may be unsuitable due to how close they are to the restrooms and the lack of reclining. The exit row before the 33rd row provides more freedom for stretching. But other travelers gather there to use the restrooms, making it inconvenient.

33A and 33F of the United 757-300 may require those sitting in them to angle their legs because of the protruding exit door. The 33rd-row seats are thinner than you’d expect from standard Economy seats, and the occupants don’t enjoy the perks of floor storage. Excluding the 33C, you may book any seat in the 33rd row before the flight.