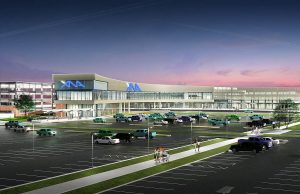 What Airports are There in Arkansas?

There are only eight small, nonhub commercial airports in Arkansas. However, they provide flights to the most popular destinations in the U.S. The majority of air traffic is handled by Clinton National Airport (LIT) and Northwest Arkansas National Airport (XNA). They are the only airports with hundreds of thousands of passengers each year. Apart from commercial ones, there are also general aviation airports that don’t have scheduled flights.

Except for Arkansas International Airport (BYH) in Blytheville, there are no other international airports in Arkansas.

The largest airports in the state are concentrated in such cities as Fayetteville, Little Rock, Fort Smith, and Texarkana. The biggest airport in the state is Clinton National Airport (LIT) in Little Rock, with more than one million passengers per year. Its on-time arrival performance is 79.87% (79.99% average in the U.S.), while its on-time departure performance is better than the average rate in the country—83.92% vs. 81.56%. The smallest airport on the Arkansas airports map is Memorial Field Airport (HOT). It welcomes approximately 4.7 thousand travelers annually.

The overall number of passengers at the state’s airports is around 1.9 million, accounting for 0.22 percent of total air traffic in the United States.

Airlines That Fly to Arkansas

The major airports in Arkansas collaborate with large, well-known American airlines. To mention just a few:

The frequency of web searches can indicate the popularity of specific destinations in Arkansas airports. As a result, the most popular destinations, according to them, are these five:

The state of Arkansas has great benefits from aviation. Both large and small airports in Arkansas contribute a lot to the economy and local communities of the state. Every year, they become more technologically advanced, attracting an increasing number of visitors and passengers. About 90 airports in the state play a vital role for local communities. Nevertheless, they get the most benefit from commercial service airports. Ten airports in the state are continuing to thrive and are looking to add additional destinations as well as refurbish and expand terminals in order to have an even greater impact on the state’s economy.

The airports in the state give jobs to around 42,400 people and contribute $3.5 billion in economic activity.