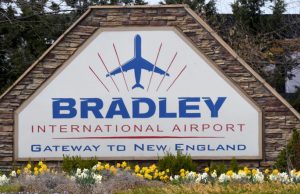 What Major Airports are There in Connecticut?

Connecticut is one of the smallest U.S. states (48th by area) still, it is a popular destination for travelers. 3,3 million people take flights to and from Connecticut airports, which is about 0.38% of all aviation passengers in the United States. The significant share of this traffic belongs to Bradley International Airport (BDL). It’s also the only international airport in CT. Despite the high load (2.3 M passengers in 2019), the airport has good on-time performance for departures (82.78%) and arrivals (77.78%). Another busy airport in CT is Tweed New Haven Airport (HVN), with about 95,000 passengers in 2019. HVN is also the smallest public airport in Connecticut with scheduled commercial service, despite being the second largest.

The airports on the Connecticut map include 20 public ones (1 international among them), 28 private, 69 heliports, a balloonport, an ultralight airport, and 4 bases for seaplanes.

There are 12 airlines that fly to and from Connecticut on a regular basis. Among them, there are 10 airlines based in the U.S.:

International carriers offering service to and from airports in Connecticut include:

Since only two Connecticut airports offer scheduled flights on a regular basis, the list of prominent places in the state that can be reached by air is rather limited. It includes:

The aviation development in Connecticut started later than in many other U.S. states, but it accelerated quickly. During the celebration of Aviation Day in New Britain in 1910, Charles Hamilton flew an aircraft through the skies. Several aviators flew over Connecticut airspace after that, especially at fairs. As a result, they were able to share their knowledge and engineering solutions with the general people, thereby popularizing aviation. A year later, in 1911, the first airport, named Robertson Field, was opened. Though being a landmark in CT aviation, Robertson Field hasn’t received the Connecticut airports code by IATA or ICAO. Its current designation by the FAA is 4B8.

The year 1911 also saw the introduction of the world’s first aviation law. The Act was signed by state governor Simon Baldwin, and it defines problems such as registration, assigning a number to an aircraft, and its use, as well as the specifics of the operators’ licensing. The Act’s structure and substance were later adapted for use in similar acts in other U.S. states. The Aviation Department was established in Connecticut, the first in the United States, in 1927, in response to the rapidly increasing aviation sector and the creation of additional Connecticut airports.