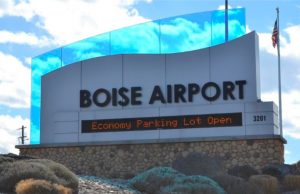 How Many Airports are There in Idaho?

Idaho has multiple airports providing access to almost any part of the state. This provides for a relatively even volume of passenger traffic and the absence of crowds in Idaho airports. In total, there are 296 airports, the majority of which are located in the southern part of the state. 121 airports are open to the public, and 118 are private ones. There are also 52 heliports, 1 airport for ultralight aircraft, 1 gliderport, and 4 seaplane bases. The summary air passenger volume of Idaho was 2.3 M people in 2020, accounting for 0.27% of all air traffic in the United States.

As primary Idaho activities are rural ones, the bulk of its airports are in the general aviation sector. Only 6 airports in Idaho provide regular year-round service, and the only international airport is Boise Airport (BOI). The pre-pandemic passenger volume of BOI reached 4 M travelers yearly. Though being the busiest in ID, the airport boasts high precision in scheduled arrivals and departures. 83.5% of incoming flights and 86.38% of outgoing ones arrive and depart on time.

With the termination of the international service from Idaho airports, the number of air carriers shortened as well. Only large domestic airlines now fly to ID on a regular basis, usually as part of connecting flights to other major U.S. airports. The following airlines sell tickets to Idaho:

Due to the proximity of Idaho airports to each other, passengers might choose any airport to get to the desired destinations. The list of the popular air destinations in Idaho is as follows:

Though Boise is the oldest one among airports in Idaho, it was in Lewiston that the first Idaho flight took place. In 1910, James J. Ward set off in the aircraft built by Glenn L. Curtiss during the local fair. The incident had been widely publicized and grabbed the attention of both the general public and government officials. Though the first flight ended with the front wheel breaking, it was quickly replaced, and numerous additional flights followed. However, the plane crashed a few days later, with James Ward surviving with minor injuries.

Half a year later, in 1911, Walter Brookins was the second pilot to take off Idaho grounds in an airplane. The 12-minute flight was performed in Boise during the fair and thrilled the crowd with the abrupt dip-and-recover maneuvers.

After that, a lot of people started to build or buy airplanes to take off to the air. The first airport in the state, Boise airport, was built in 1926, primarily for cargo transportation operations. In the 1930s, other significant airports, such as IDA and SUN, appeared.