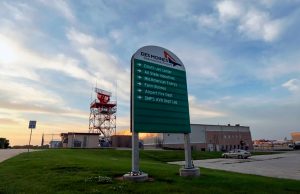 How Many Airports are There in Iowa?

According to the Iowa airports map, the majority of air traffic in the Iowa state is concentrated in one city—Des Moines. Every year, the three main airports in this city handle approximately 3 million people. These airports are served by the biggest U.S. airlines.

Most airports in Iowa work for general aviation. There are also eight commercial service airports. In addition, eight private airports are open to the public.

The major airports in Iowa have a partnership with such airlines:

Based on Internet searches, the most popular destinations at Iowa airports are the following:

Before the appearance of the first airports in Iowa, the first flight that took place in the state was the balloon flight, performed by Professor Silar Brooks in the middle of the 19th century. The first aircraft flight in Iowa was performed by Art J. Hartman on a monoplane (1910). The museum houses aircraft models that were built before World War II, including unique and military models. They can reveal a lot about people who had a great impact on aviation in the state.