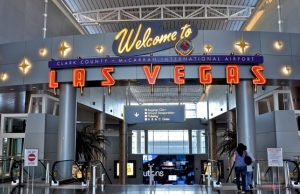 How Many Airports are There in Nevada?

There are not many airports in Nevada. Despite this, many of them have busy air traffic as they are centered around Las Vegas, where millions of people from all over the world travel all year round. There are 2 international and 54 public-use airports. Because there are so many tourists in the state, the majority of them are well-equipped and convenient. They also provide flights to the most sought-after destinations within the country.

Harry Reid International Airport (LAS) is the largest airport on the Nevada airports map and handles most traffic in the state, welcoming approximately 23 million passengers per year. Its on-time arrival rate is 81.22%, the on-time departure performance rate is 79.24%.

All the other Nevada airports are small and handle regional and domestic flights. The smallest airport in the state is Elko Regional Airport (EKO) with a bit more than 18 thousand passengers per year.

The total air traffic from all airports in the state is 26 million passengers, which contributes 3.04% to the total traffic in the United States.

The international airports in NV work with such non-American airlines:

American airlines that operate in the state’s airports are the following:

Nevada Aerospace Hall of Fame (NVAHOF) is a non-profit organization founded in 2008 with an aim to educate people about aviation history and unique contributions of people who pioneered aerospace programs in the state.

Aviation in Nevada has a great legacy: early airmail flights, the first round-the-world flights, and secret World War II programs that were only carried out in Nevada.

The government has made significant contributions to secret aviation and aerospace science.

NVAHOF honors all the unique individuals who pioneered and developed national aerospace programs in the state. It also aids others in their research of Nevada’s aerospace history. It maintains videos and photos that are extremely important for the state’s aerospace history and shares them among historians, authors, students, etc.