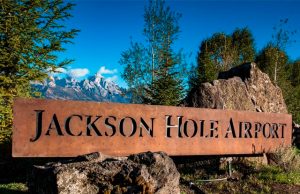 How Many Airports are There in Wyoming?

While Wyoming is popular among U.S. campers and nature lovers, aviation is not the state’s major concern. Each year, about 600,000 people use the services of Wyoming airports. The Federal Aviation Administration (FAA) statistics shows that the state has about 40 publicly accessed airports, nine of which offer commercial service. All airports in WY are classified either as small hubs or nonhub ones. The busiest air hub in WY, Jackson Hole Airport (JAC), serves from 500,000 to 900,000 passengers annually. The airport has good timing indexes matching the average ones across the USA (80.37% for arrival flights and 81.62% for departures). The smallest airport in WY is Central Wyoming Regional Airport (RIW), with only one operating carrier and passenger traffic of roughly 12,000 per year.

With the onset of the Covid-19 pandemic, the commercial airports in Wyoming have seen a decrease in demand and, subsequently, operating airlines. As of 2021, you can board the aircraft of the following carriers to fly to or from WY:

Most Popular Destinations in Wyoming

While Wyoming has an international airport, the searches for WY-based destinations are mostly done from the US. The list of Wyoming most frequently searched destinations is as follows:

Wyoming, like many other U.S. states, experienced the boost of aviation development during World War II. The B-17 bomber planes were rebuilt at Cheyenne before being released into the sky—and onto the battlefield. A whole modification center was built, where planes were disassembled, repaired, and remodeled, and then reassembled in a matter of hours. Still, Cheyenne airfield had been used for military purposes long before—in 1919, it was chosen as a main stop for military planes crossing the U.S. territory from one coast to the other.

Cheyenne was also the most famous among airports in Wyoming due to Boeing Air Transport Company’s use of it as a key airfield for postal deliveries. The city also saw many aviation innovations during the 1930s, such as the placement of oil cooling tanks in the aircraft’s engine compartment.

After the end of WWII, the impact of Cheyenne decreased considerably. However, the city still has its airport, Cheyenne Regional Airport, used for civil and military purposes.