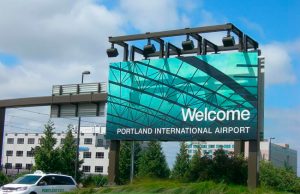 How Many Airports are There in Oregon?

Oregon has multiple tourist attractions and subsequently a well-developed network of airports. The state’s 98 airports are open to the public while there are lots of private airports in Oregon as well. Each year, OR airports welcome 11 M travelers, which is about 1.3% of the total air passenger traffic of all states.

The airports feature diverse facilities and use cutting-edge technology. The timings of the busiest airport in the state, Portland International Airport (PDX), surpass the ones common for the US. They achieve 83.55% for timely arrivals and 86.5% for departures. The airport opens gateways for about 10 M passengers annually. Another big international airport of the state is Rogue Valley International—Medford Airport (MFR).

Crater Lake—Klamath Regional Airport is the last on the OR airports size list, with the annual passenger traffic making about 5,000.

While Oregon international airports are usually busy, the majority of air trips to and from the state always belong to domestic destinations. Here’s the list of the major airlines scheduling their flights to Oregon:

Portland is a leader in Oregon flight searches. It accounts for 80% share of all searches for airports in Oregon. Eugene and Redmond take the 2nd and 3rd position, with 8% and 7%, respectively. Medford is another popular Oregon location (5%).

The museum is located in McMinnville in Oregon. Its collection counts over 50 exhibits. Aircraft constructed or operated at Oregon airports, as well as satellites and unmanned aerial vehicles, are on exhibit. The wooden boat built as an aircraft, Hughes H-4 Hercules, is one of the central attractions of the museum’s collection. The museum premises are quite big and consist of four halls: two exhibit halls (one for aircraft and another for spacecraft), the IMAX room, and a water park.

The society aims to preserve the educational materials and objects related to the aviation history of the state, as well as to increase awareness of aviation development in the region. The organization established the museum in the Cottage Groove where the aircraft modeled at home by inventors in Oregon are preserved and displayed. These exhibits date the pre-WWII period and make a historical landmark, as it was in 1952 only that the experimental planes were legalized in the US.

The museum has many unusual exhibits including the Geodetic invented by George yates. There’s also a mid-wing Longster plane, a 1930 Cirrus Racer, an RV3, and a Pietenpol by Ford (this one is the plan-build exhibit). The collection is located at 2475 Jim Wright Way, Cottage Grove, OR.