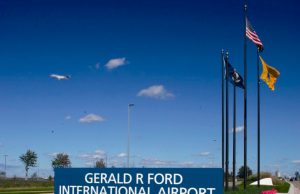 How Many Airports are There in Michigan?

For anyone traveling to or from Michigan, there are over 235 airports to choose. Aviation is highly popular across the state, so there are many private airports in Michigan. However, only fifteen airports serve commercial flights on a constant basis. Though it causes crowding at the airport, the well-developed infrastructure and competent management ensure a high percentage of on-time arrivals and departures.

The only large hub—Detroit Metropolitan Wayne County Airport (DTW)—welcomed 14 M passengers in 2020. The airport timing is one of the best across the States, with 84.2% precision for arrivals and 84.22% for departures. The second one among all Michigan airports is Gerald R. Ford International Airport (GRR). 1.7 M passengers were received there in 2020. Gogebic-Iron County Airport (IWD) is considered the smallest public airfield in Michigan, with roughly 5,000 travelers landing or departing there yearly. Most airports based in Michigan are categorized as small hubs, with some having the nonhub status. The total annual passenger number for Michigan airports exceeds 20 M persons, accounting for 2.37 percent of all air passengers in the United States.

During 2020, most flights to and from the airports in Michigan were domestic. It is not a surprise that United Airlines and Delta Air Lines got on top, respectively, in terms of passenger traffic. While Air France used to be one of the most frequently used airlines in 2019, in 2020 and 2021, it was replaced by US-based carriers like Allegiant and American Airlines.

Most Popular Destinations in Michigan

The land of the first paved runway, Michigan had a lot of aviation enthusiasts throughout its history. The interest in flights has been additionally motivated by commercial considerations. The landscape challenges and considerable distance between the major cities make air transportation a convenient and profitable way of travel.

Michigan’s aviation industry is growing at a rapid pace. Flight schools are frequent, and recreational flights are highly popular. Many general aviation and commercial airports in Michigan show the tendency to grow and increase the cargo/passenger volume, even during the Covid pandemic. The Aeronautics Commission of Michigan unites multiple air organizations, including airlines, airports, flight schools, drone operators, commercial spacecraft managers, and so on. The Commission publishes the directory of Michigan-based airports annually. The directory can be bought or accessed free of charge via the MiAirports app.

The University of Michigan is a home to the student’s organization called «Michigan Aviators.» This organization promotes aeronautics knowledge among all people interested in it and helps in getting pilot skills and FAA-approved pilot license. Another activity promoted by Michigan Aviators is building and improving the aircraft.