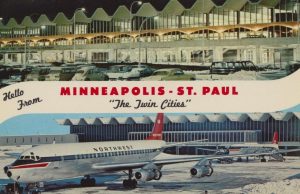 What are Major Airports in Minnesota?

There are eight Minnesota airports that offer commercial flights. More than 95% of all air traffic in the state is concentrated at Minneapolis–Saint Paul International Airport (MSP), which has the most travelers per year (18.3 million, while the total traffic from all the Minnesota airports is 18.7 million) and is also the biggest airport in the state. It has 84.22% on-time arrival performance compared to 79.99% in the U.S. The on-time departure performance is 84.98% compared to 81.56% in the U.S. The smallest one is Thief River Falls Regional Airport (TVF), with 4805 travelers per year. In total, in the state, you can find 156 airports for public use.

The state is a very sought-after landing-place, so airports in Minnesota see a high volume of air traffic every year, contributing 2.1% to the total traffic of the U.S.

Airlines Which Fly to Minnesota

The small hub and non-hub MN airports are served by such airlines as American Eagle, Delta Air Lines, and Allegiant Air. The others work with SkyWest Airlines, Sun Country Airlines, United Airlines, United Express, and others.

Flight searches on the web are a good way to find what are the most popular destinations at the major airports in Minnesota. The leader is Minneapolis (94%). Rochester (3%) and Duluth (2%) also appear to be popular landing-places.

The Minnesota Aviation Hall of Fame is a non-profit organization founded to honor living and passed away aviation pioneers who have made essential contributions to the development and advancement of aviation in the state. It preserves biographical docs (interview tapes, photos, etc.) on all famous state’s aviation figures. All these collected archival materials are essential for researching the lives of honored Minnesota aviation personalities. You can see the replicas of the award plaques received by Minnesota Aviation Hall of Fame inductees in the Wings of the North aviation museum.