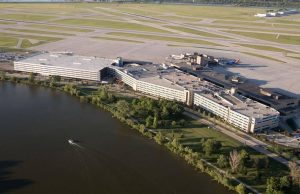 What Airports are There in Nebraska?

There are 82 public airports and 129 private ones in Nebraska. All of the public-use airports are regional since there are no international airports in the state. However, a lot of commercial airports in Nebraska have high traffic since they provide flights to many popular destinations across the U.S.

All airports in Nebraska have around 2.7 million passengers per year, contributing 0.31% to the total traffic in the U.S.

Airlines Which Fly to Nebraska

Nebraska was the first state in the country to have its own navigational facilities. In 1955, the Nebraska Department of Aeronautics announced that three Wilcox VOR stations began operation in three different cities across the state. During the first month of their operation, the issues related to signal accuracy and signal radiation characteristics have been investigated and resolved. Thanks to that, several more VOR facilities appeared in the state.

Another important point in Nebraska aviation history was the first night air mail flight in the U.S. It occurred in 1921. The airplane flew to Omaha and then to Chicago.

The first electrically lit airfield took place in Nebraska as well. In 1923, Nebraska’s North Platte airport started to use electric lights instead of bonfires.