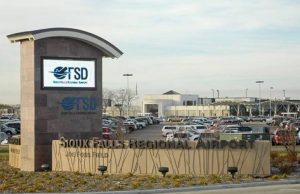 What Airports are There in South Dakota?

The South Dakota airports are well-connected to the largest U.S. cities. The biggest regional airports are situated in Aberdeen, Pierre, Rapid City, Sioux Falls, and Watertown. Aberdeen Regional Airport is the oldest of them.

On the map of South Dakota airports, Sioux Falls Regional Airport (FSD) appears to be the largest airport in the state (529,895 passengers), and the smallest one is Watertown Regional Airport (ATY) (12,064 travellers).

The most popular airlines that serve major airports in South Dakota are the following:

Here is a list of the most popular destinations in South Dakota airports by the percents of online queries:

The South Dakota Air and Space Museum is a historic site located on the Ellsworth Air Force Base. It was established in 1957 to provide air defense to the Rapid City Army Air Base (a location where the heavy bomber units training took place during the World War II period). It bears the name of Brigadier General Richard E. Ellsworth, who died in 1953 during a training flight. The Ellsworth Air Force Base has kept the status of the military facility up to this day. It makes a great contribution to the Rapid City economy.

The museum is one of the largest national repositories dedicated to Air Force airplanes. It offers numerous indoor and outdoor exhibits that are open to the public and are free of charge (but the museum accepts donations). People who are interested in aviation and the United States Air Force should visit this museum.

The majority of installations are placed within the airpark. There you can see 22 of 3,970 B-29 Superfortress aircraft that were manufactured and assembled during the World War II period. Aside from exhibits, there are also pictures, maps, dioramas, and other unique showpieces that can tell you more about aviation. You can purchase Air Force-themed merchandise at the museum’s gift shop (airplane models, T-shirts, caps, etc.).